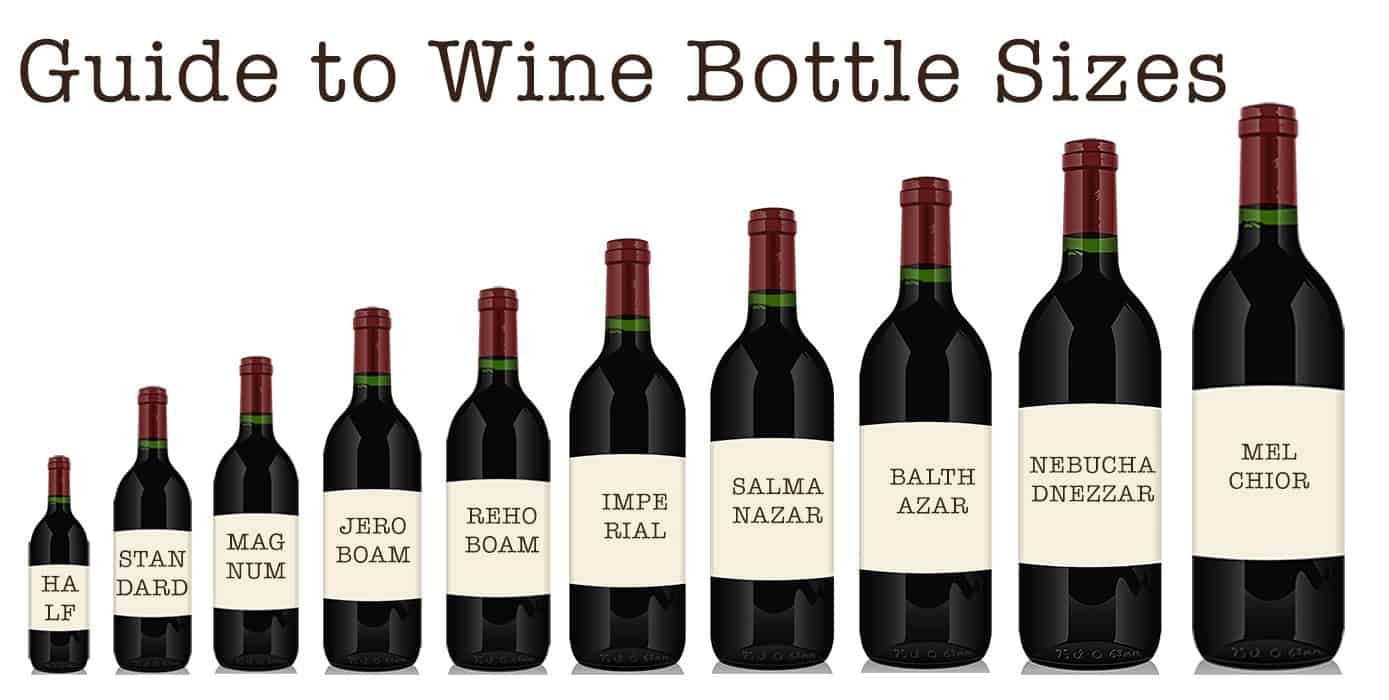 Have you ever admired the vast range of wine bottles with different bottle sizes and pondered how these pieces of art deserve almost as much appreciation as the wine itself?

Well, nothing happens by accident and it’s certainly true that a lot of thought and craftsmanship goes into selecting the right bottle to hold a particular wine.

Design aside, you may have also noticed wine bottles of different sizes, but you may not realize just how many different wine bottle sizes are available, and what they could all possibly be used for.

The standard bottle of wine that sits on tables, racks, and shelves around the world is 750 ml and is known quite simply as ‘standard’ in the industry. While there are over 20 different sizes available, some have clear purposes in the wine world and others… not so much.

Many of these different variants are named after biblical kings and historical figures, but to try and help you get to grips with them all, we’ve put together a handy guide.

This aptly named bottle means ‘small’ in Italian and is known by other names including quarter bottle, pony, spine and split. It is used only for Champagne and holds one quarter of the amount of a standard 0.75 L bottle.

Although this bottle is titled Quarter, it holds 0.2667 % of a standard 0.75 L bottle, making it slightly more than a quarter. Similar to the Piccolo, this bottle is only used for champagne.

The Chopine is sized to match a traditional unit of wine volume in France, and is exactly one third of the capacity of a standard bottle. This bottle is used for Bordeaux wines.

Meaning ‘half’ in French, this bottle is exactly that: half the size of a standard issue. More widely used than its smaller counterparts, the Demi can contain wines from Champagne, Bordeaux and Burgundy.

Demie and Demi may be pronounced the same, but there’s a distinct difference in size and use. It is also referred to as ‘Pinte’ sits at exactly half a liter, and is used for Champagne and also sweet wines such as Tokaj and Sauternes.

This bottle is mostly produced in the Jura region of eastern France, where it is used for Vin Jaune or “yellow wine”, which is similar to dry Sherry. It is the first smallest size after the standard bottle, and is 83% of the normal 0.75 L. 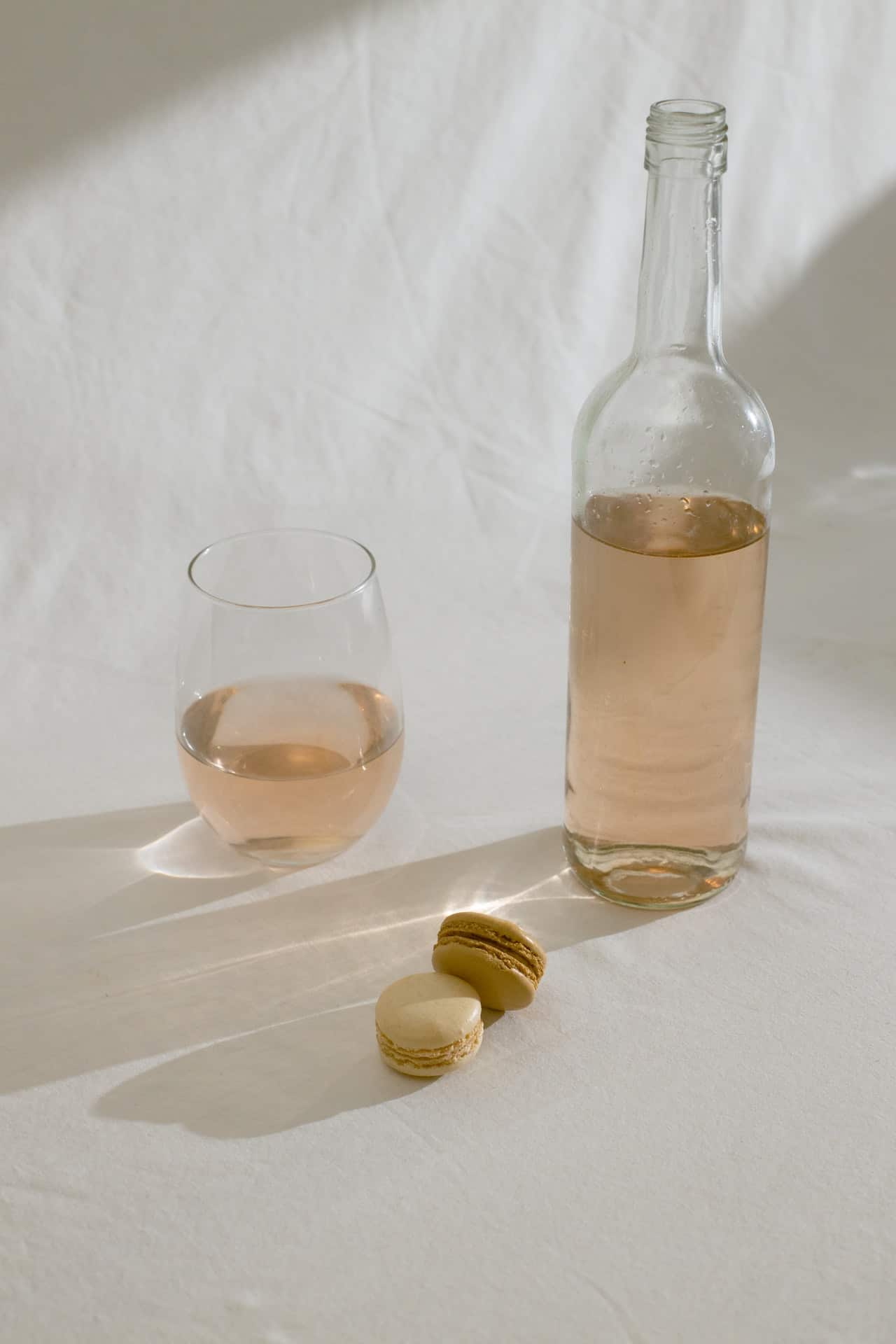 Although it is not as imaginatively named as the others, there is no mistaking the standard bottle which is the most widely used by a very long distance among winemakers worldwide.

The standard bottle is used for all types of wines, red, white, rosé, Champagne and comes in many different shapes, as different producers try to make their bottle the most beautiful of them all.

Also named literally, the Liter bottle of wine may not be common to French, Italian or US producers, however it is popular with Austrian wine producers, so if you spot a Liter bottle, then it is likely to have Austrian origins.

The Magnum bottle holds certain significance in the wine world, as many connoisseurs consider the Magnum to be the largest bottle suitable for high-quality Champagne.

The fine sparkling wine is most often fermented in Magnum sized bottles or smaller, therefore if Champagne is sold in a higher volume than 1.5 L, it will likely have been transferred to second bottle and lost some of the quality from fermentation. As well as Champagne, the Magnum bottle is also used for wines from Burgundy and Bordeaux.

The Marie Jeanne is used for wines from Bordeaux and is also relatively common for Port wine, where it may be called Tregnum or Tappit Hen. The Marie Jeanne bottle is exactly 3 times the size of a standard 0.75 L.

At around three liters is the Jeroboam, and although the size of a Jeroboam-named bottle may vary in different regions of France, it always sits between 3 and 4.5 L. The 3 L Jeroboam is used for Champagne, Bordeaux, and Burgundy wines. Larger versions are more common in Bordeaux.

The same size as a large Jeroboam, the Rehoboam is the name given to a 4.5 L bottle of wine outside of the Bordeaux region and can also be used for Champagne.

Almost exclusively found in France, the McKenzie bottle is 6.67 times the size of a standard 0.75 L, and is most commonly found in use for Bordeaux wines.

With a name like Imperial, it is hard not to be impressed with the size of this wine bottle, but this is still nowhere near the top end of our scale. At 8 times the size of a standard bottle, this variant holds 1 Imperial gallon of wine.

Named after the biblical Assyrian King, this royally large bottle holds a whopping 9 liters of wine, and its use varies, including Champagne, Bordeaux and Burgundy wines.

If you consider a 12 L bottle of wine to be a true gift then it is no surprise, as this bottle is named after Balthazar of the three Wise Men, who rode across the desert to present gifts at Jesus’ nativity.

Another worshiped biblical figure is Nebuchadnezzar, who was no other than the King of Babylon. This holy bottle contains a staggering 15 L is exactly 20 times the size of your standard 0.75 L bottle over dinner.

This bottle also comes bearing wonderful gifts and is named after another of the three Wise Men, who generously offered Gold, Frankincense and Myrrh. Melchior bottles of wine can contain Champagne, Bordeaux and Burgundy wines.

Breaking with the tradition, the Sovereign bottle is not named after a biblical figure or worshiped King, but instead a cruise ship.

This 26.25 L bottle was created in 1988 specifically by Taittinger, to launch the world’s the largest cruise liner: Sovereign of the Seas. In line with cruise ship tradition, the bottle holds Champagne (and a lot of it too).

Almost, but not quite, making it to the top of our list is Goliath, a bottle whose name quite rightly indicates its gigantic size.

In the bible, Goliath the giant warrior was defeated single-handedly by David, but we wouldn’t recommend trying to tackle this bottle of wine by yourself. The Goliath can contain Champagne, and wines from the Bordeaux region.

Last but certainly not least is the Melchizedek. Holding a phenomenal 30 L, this bottle can almost be considered a feat of engineering and one of the rarest bottle sizes to be found in the wine world.

When produced, the Melchizedek contains Champagne, although it is to be handled with care, as wine bottles this large have been known to explode. So perhaps admire this one from a safe distance.