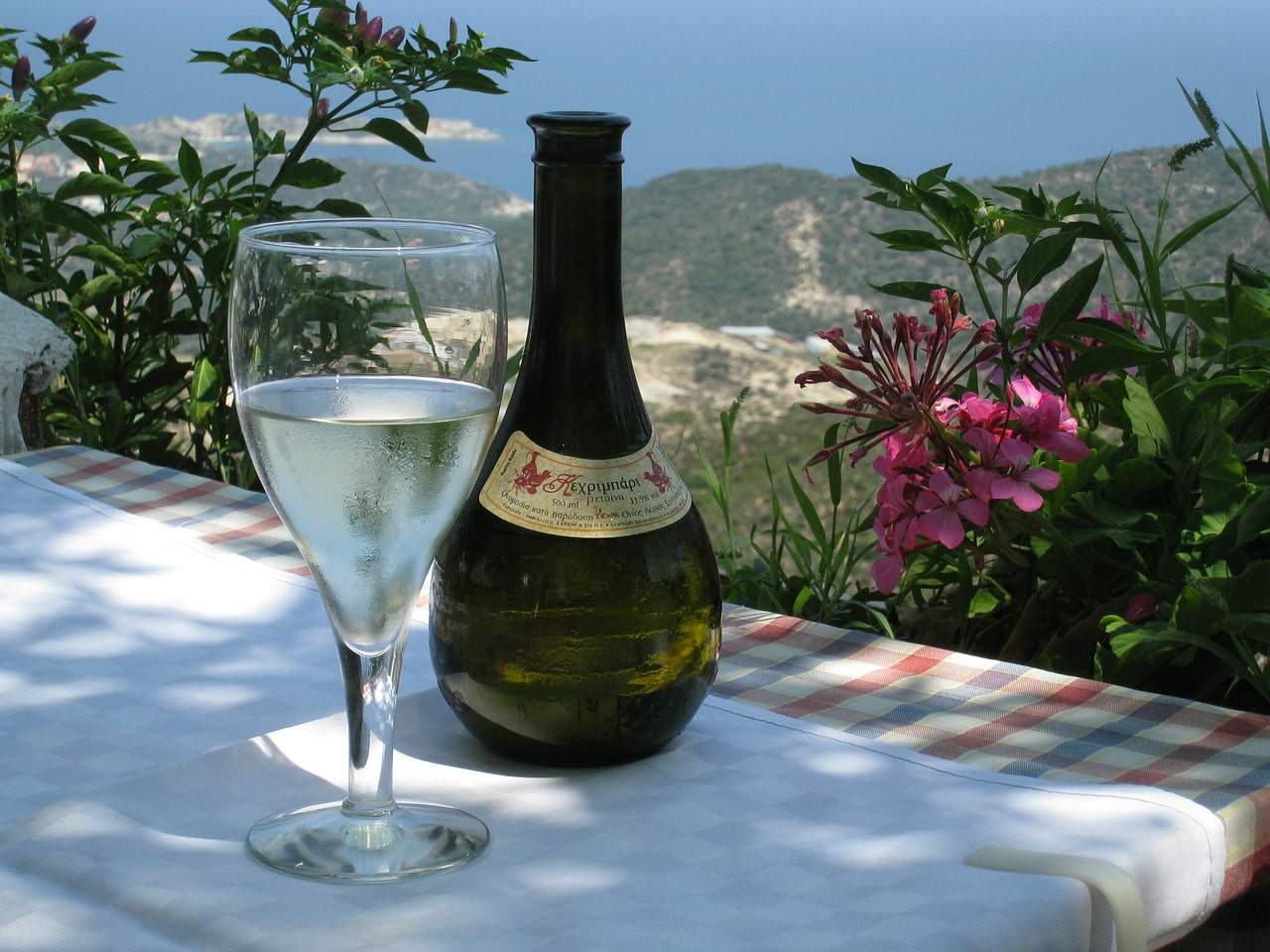 An exploration of Retsina is simultaneously an exploration of ancient and modern Greece. It is a wine that has changed with time and has been shaped by history. It is a Greek tradition. For over two thousand years this style of wine has been consumed with gusto.

Here we’ll dig deep into Retsina wine, thus to learn more about it read this post until the end.

In general, Retsina is a white wine (or possibly rosé) which is made primarily from Savatiano grapes and is mixed with small amounts of Aleppo pine resin during fermentation.

This process results in a wine which typically tastes of apple and peach while leaving you with a slightly oily mouthfeel and hefty aroma of pine. For some the wine is “that wine” you warn your friends not to have at a Greek restaurant, for others, it is a mainstay of each meal.

It is a wine which is still changing to this day with winemakers working diligently to innovate the process, explore new grape varietals, and preserve Retsina’s place in an ever-changing wine culture.

Oxidation Experiment: If you want to experiment with this (not that it’s recommended to treat dear old wine this way) just buy a bottle of wine, have a couple of glasses to appreciate its flavor, and then leave the bottle out overnight uncorked and try it again. Oxidation will set in and your once fruity wine will now be tart. Modern innovations in the winemaking process post-harvest have reduced this problem at the industrial scale significantly.

Retsina- The Wine of The Gods?

How is Retsina Wine Made?

Historically Retsina was infused with large amounts of pine resin from sealing the amphorae because this is what was necessary to stave off the flavor sucking oxidative onslaught from the outside air. The wine would also be saturated with salt as another line of defense against oxidation.

Now, however, neither condition is the case.

Modern Retsina is predominantly made from Savatiano grapes, which happens to be Greece’s most planted white grape. Sometimes, Assyrtiko or Rhoditis grapes are added to the mix as well as other varietals found throughout Greece. Whichever grape is ultimately used the wine is distinctly Greek.

Retsina is an old world wine that has a flavor profile that varies from brand to brand.

Since Retsina can be on a spectrum of pine resin strength from very mild to “I think I’m drinking a pine cone” there are also versions of the wine which have been likened to turpentine.

If you have tried the “pine cone” version, have faith they are not all like that.

Retsina is generally considered an acquired taste and it is probably best to be aware of that before diving in. If you try Retsina and find it to be too strong stick with it and give it it’s fair due.

Drinking Retsina is drinking a part of Greek culture and, as with any new or shocking cultural difference, it is ultimately worth taking the time to appreciate it and find some beauty in it.

How do You Serve Retsina?

Retsina is a wine where the way you drink it can matter quite a bit more than with some other wines.

The general recommendation with Retsina is to drink it very cold and from a wide-open glass. This helps to temper the aroma of pine which can sometimes be overpowering. In a more acute glass, the odor will be trapped and can completely subdue the other elements of the wine.

An argument can also be made that Retsina should be consumed along with other elements of Greek culture, such as:

All these should be paired with Retsina consumption. Maybe listen to Dimotiko and enjoy some dolmades while you drink a glass or three of Retsina. Don’t just try it as a wine, try it as a cultural experience.

What Should I Pair with Retsina?

Because of the pine resin in Retsina, the wine is known to have herbal aromas. This helps it to pair very well with:

Lemon, mint, and rosemary also pair very well. Overall you should think strong flavors to match the strong flavor of the wine. Spicy and savory dishes work well too, especially those with pickled, salty, or garlic components.

To go full Greek you should definitely pair the wine with Dolmades. If you’re not familiar, grape leaves, stuffed with an herbal rice mixture, made into small rolls and boiled. They are extremely delicious and just a little addictive.

You should also consider putting together a traditional Greek ‘meze’ (Meh-Zeh) platter. ‘Meze’ literally translates to ‘a taste’ and that is just what this essential Greek platter is. It is composed of small plates of hot and cold savory dishes like:

The variations are seemingly endless. In some ‘meze’ you might find meatballs or even octopus!

Retsina pairs well in some slightly unconventional ways as well, like:

What is The Best Retsina Wine?

Making a statement on the best of any wine is somewhat like saying what the best book or TV show is for every person. It mostly doesn’t work. Individual preferences are so varied that subjectivity rules the day here. Still, for the sake of information there are some recommendations that can be made for very good and affordable versions of the Greek drink.

Is Retsina Really a Wine in The Classic Sense?

After all that has been written here this final question might be the one worth considering most.

There is a strong and worthy argument to be made that Retsina isn’t technically a wine but is, instead, more of a wine-based drink. In many circles, Retsina is undoubtedly a wine and has been addressed as such here. Just consider for a moment however that this might be more a matter of nomenclature and less a case of substance.

How is Retsina Different From Wine?

With Retsina some might say that the same situation is at play. Retsina really is a technique and not a wine.

Playing devil’s advocate here it is possible to say that Retsina can be viewed as a one-trick pony. That’s fair to say if you look at it through the lens of the normal wine experience. Retsina is not a normal wine though.

Retsina is a modern manifestation of an ancient process and, because of that, maybe it really isn’t meant to be enjoyed like most other wines. Typically you would sip a glass of wine to experience the terroir of where it came from, you drink to taste the land, the place, maybe appreciate a degree of the culture that created it.

Even if Retsina is a one-trick pony maybe it’s one trick is to pull you strongly and unabashedly into an experience that shocks you, just a little, and makes you question what you like. It brings you face to face with something that is, for better or worse, very Greek and that, for many, is also very foreign. Maybe, ultimately, that is a very good thing.

Bonus tip: You can watch a blind taste test of the Kechris Tear of the Pine Retsina by one of the best Sommeliers in the world, Andreas Larsson!