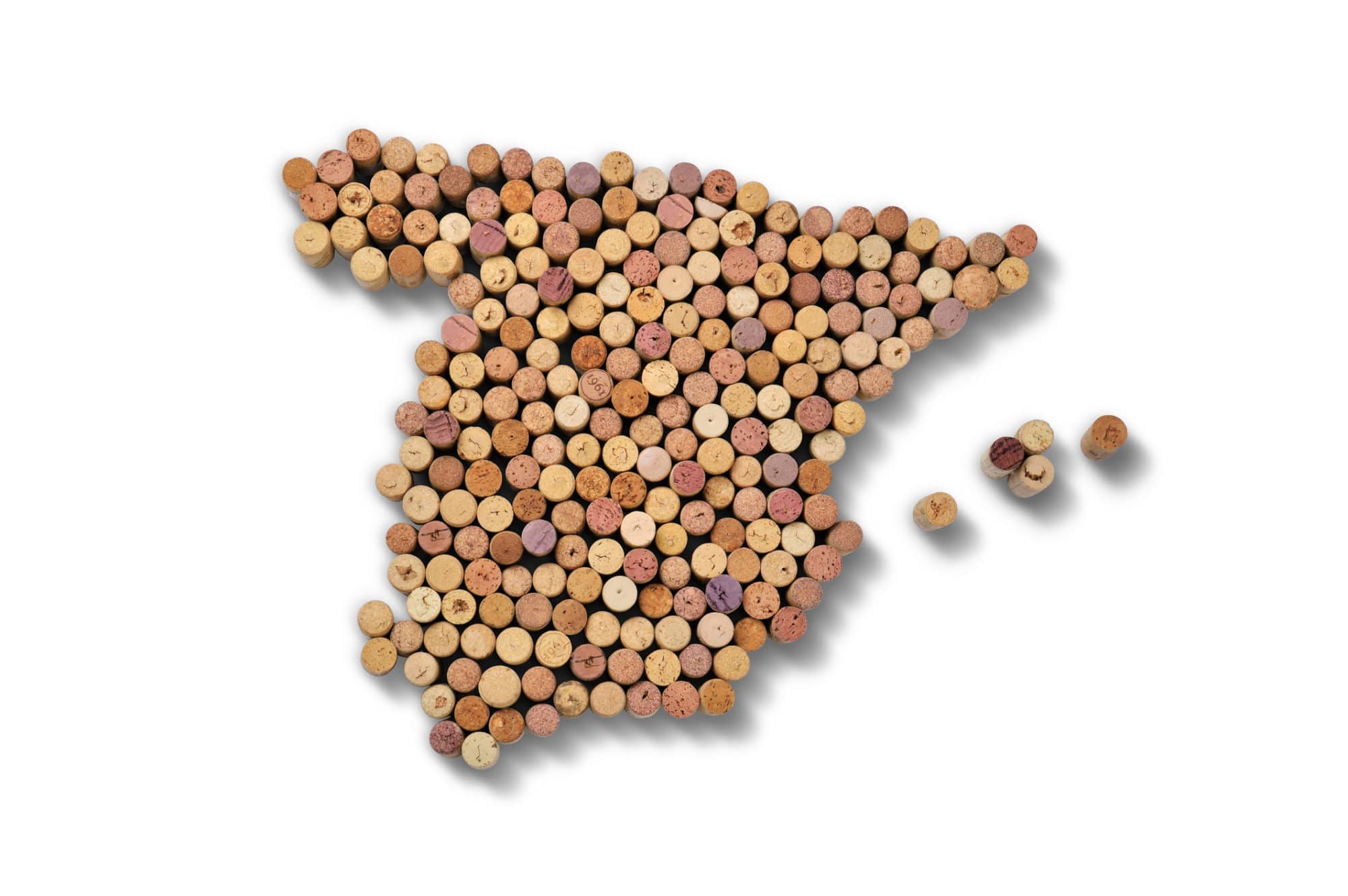 Spanish wine regions are exceptionally varied in climate and tradition. Spain produces some of the most intriguing and complex wines in the world, from the refreshingly salty Albarino of northern Galicia to Listan-Negro reds of the Canary Islands.

In terms of viticulture, Spain is smothered beneath the looming shadow of neighboring France. It’s an unfortunate and undeserving casualty. As the planet’s third largest wine producer, with vineyards sprawling over one million acres (the most land in cultivation in a single country in the world).

Wine country is unequivocally varied, and Spanish wine regions are no different. Spanish wines take on the flavor of their growing environments. The Spanish wine regions produce white wines known for zesty, minerally freshness and bold reds. Spain’s DO system is far less complicated than France’s AC hierarchy. Most Spanish DOs are so massive they include terrains and climates the French would cut into dozens of separate AC appellations.

Less stricture means more time experimenting. Spain’s wine experimentation is paralleled only with the New World. Many of Spain’s most exciting wine is being produced outside of Spain’s official denominations. As a result of Spain’s viticultural renaissance, the country’s wines are enjoying international popularity like never before.

Altitude and latitude make Spain uniquely situated for wine. The overwhelming majority of Spanish vineyards are at much higher altitudes than their French counterparts. Spain’s climate is a mixed bag, though; drought is familiar companion to Spanish vintners, especially in the south, east, and northeast.

Most Spanish bodegas buy and sell in wine and grapes, meaning single-origin bottling is not so common. Traditionally, Spanish bodegas were places where wine was aged, often for extended periods of time in American oak. Times are changing, though. French oak and less mature wines are becoming more common, and have no less character and quality to show for it. An increasing number of Spanish producers value wine intensity over age.

For centuries, the coastal Spanish wine regions produced the best wine. But new practices and ideas are helping the interior regions make some spectacular wines. Fruit-forward, stylish red blends are being produced in places previously cast aside. Local grape varieties are often blended with international imports.

What’s on the bottle

Here are the terms you’ll need to know to when making sense of Spanish wine:

Ready to embark on an adventure into the rich and evolving Spanish wine regions? Grab a glass and let’s get pouring!

Also known as “Green” Spain, this verdant corner of Spain is caressed by the Atlantic Ocean. The Atlantic permeates everything here, especially the flavor of the wine. Galicia’s wines are far removed from the phenotypical red Spanish wine; delicate, lively, aromatic whites are king here, and match perfectly with the region’s seafood. Far and away, Albarino is the most famous grape grown here, and is revered for it’s refreshing mineral taste and light saltiness extracted from the maritime climate. As a whole, Galicia specializes in zesty white wines and a selection of aromatic reds made from the Mencia grape. Val de Salnés is home to Galicia’s most important vineyards.

Catalonia is best known for Cava, Spain’s iconic sparkling white wine. Catalonia also contains the lauded Priorat sub-zone, which produces some of the world’s best red wines. Catalonia is more like Rousillon across the border in France, sharing common linguistic and cultural traditions. Catalonia is a smorgasbord of wines ranging from the lightest sparkling wines to deep, dark syrups. For still wines, Penedès is the most important DO.

At home along the Ebro River are the neighboring regions of Rioja and Navarra. Rioja used to have the Spanish fine wine market pegged. But the nation’s resourceful wine industry has outpaced Rioja’s longtime monopoly on Spanish fine wine. Still, Rioja’s variety, rich traditions, and adaptability keep the region’s wines sitting on the top shelf. Like many Spanish wine regions, Rioja is divided into seperate sub-regions; Rioja Alta in the west, Rioja Alavesa in the north, and Rioja Baja in the east. Tempranillo is the principal grape grown in all three regions, with prestigious bodegas such as Lopez de Heredia and Marques de Murrieta making some stellar wines. Navarra is famous for rosado (rosé) crafted from Grenache. In Basque, zesty white Txakoli (chak-o-li) are household names. The growing wine renaissance of the Spanish wine regions has found a home in Rioja. Once known for ubiquitously strong and punchy aged wines, the region’s bodegas now macerate gentle Tempranillo longer and bottle it earlier after short aging in French oak. The result is a wine deeper and fruitier than its predecessors.

For most of viticultural history, Toro was known for its rustic wines. But this Spanish wine region’s local variant of Tempranillo (in Toro called Tinto de Toro) has of late been masterfully crafted into dramatic wines. Toro’s high altitude and sandy soils make for grapes with a consistent flavor and color. Most of Toro’s wines are sold relatively young after aging at least 12 months in oak, making Tinto de Toro wine remarkably fruit-forward. Other red varieties and even full-bodied whites are gaining momentum in Toro’s bodegas.

Located next door to Rioja, Navarra and its neighbor are synonyms of Spain’s viticulture heyday. Both Rioja and Navarra were bolstered by the destruction of Bordeaux’s wines in the 19th century at the hand of phylloxera. Traditionally Navarra’s vineyards were dedicated principally to Garnacha, used to produce utilitarian rosados and strong reds. More recently Grenacha has been supplanted by Cabernet, Merlot, Tempranillo, and even Chardonnay. The most celebrated Navarra wines are obviously oak aged with international and Spanish flavors. Wines produced north of the Ribera Alta sub-region tend towards paleness and lower alcohol. Baja Montaña produces primarily rosados.

The same river that flows into the Douro Valley of Portugal first must pass through the Duero River Valley of Spain. This Spanish wine region is particularly known for the white wine Verdejo and bold red wines. The Duero River Valley is the modern red wine miracle of Spain. Unacclaimed several decades ago, it now rivals Rioja as Spain’s foremost wine region. The wines of the Duero River Valley are characterized by lively acidity thanks to crisp nights and high altitudes. The region’s climate produces reds of intense flavor, similar to the wines of Rioja. Tempranillo is king in Duero, and around Toro it’s called Tinta de Tor. The Duero River Valley is home to four sub-regions, Ruedo (white wine, specifically Verdejo), Toro, Ribera del Duero, and Leon. The later three regions are famous for their bold reds. One of Spain’s most famous wineries, Vega Sicilia, is established in Ribera del Duero.

The inner plateau of Spain (or Mesta Central) is home to the capital Madrid. The Plateau is central to Spanish life and identity. Here, the monotony of flat, endless vineyards numb the mind and hurt the eyes. La Mancha, the region’s chief DO, is part of a system of vineyards that cover more acreage than all Australia’s vineyards combined. The Plateau’s climate and high elevation require some extra coaxing to produce notable wines. Vines here are spaced far apart and close to the ground, resembling bushes more than vines. The result are some excellent value reds, including Garnacha, Tempranillo, and the rare Petit Verdot.

This is Sherry country. Walking through the chalky soil of Palomino vineyards in Cádiz feels and looks like a moonwalk. The blistering heat of Montilla-Moriles and Málaga produces fortified dessert wines similar but distinguished from Sherry. These aged “PX” wines deliver flavors of nuts and dates, similar to tawny port. Sherry, however, is still the region’s most notable wine, indeed perhaps the most notable in all of Spain. But with the international market slowing for Spain’s iconic drink, many winemakers are improvising. Bodegas are focusing on red wine made from grape varieties like Petit Verdot, Tempranillo, and the local variety Romé. Many delicious whites are also being produced here, a surprising feat considering the region’s high altitude. Winemakers in in the hinterlands of Costa del Sol are creating some spectacular wines, and the Vinos de la Tierra made in nosebleed-high Granada are poised to become some of the most exciting up-and-coming wines in Spain. Still, Sherry is the reigning symbol of Andalucia, and barrels of Sherry aging in the ornate bodegas of Jerez are a sight to see. In Andalucia, dry wines below 15 percent ABV are called Sierra de Málaga. Málaga denotes a fortified wine (such as Sherry) between 15 and 22 percent ABV or a sweet wine over 13 percent ABV.

Somontano is translated “at the foot of the mountains.” The snowy peaks of the distant Pyrenees can be seen in the distance. But it isn’t this magnificent range that most affects Somontano’s viticulture. The Sierra de Guara and Sierra de Salinas make it possible for vines to flourish in this Spanish wine region. Somontano is one of Spain’s youngest and most curious DOs. Unlike famous Spanish wine regions like Rioja, Somontano’s DO was the product of a government attempt to bolster tourism and cosmopolitan glamour. Somontano doesn’t produce Spain’s most lauded vines, but it does craft a reliable value wine. Crisp acidity is a distinguishing mark of Somontano wines. Some French varieties, Tempranillo, and even a take on a dry Gewurztraminer are the region’s claim to fame. Other traditional varieties have long been grown in Somontano, such as loganberry scented Moristel, minerally Parraleta, and dry Macabeo.

Ready to embark on your own adventure into the Spanish wine regions? Check out the Spanish wines available at your local wine store, or shop hundreds of varieties online.

All About Albarino Wine

Madeira Wine Review: “The Wine That Made the Round Trip”

Everything You Need to Know About Tempranillo