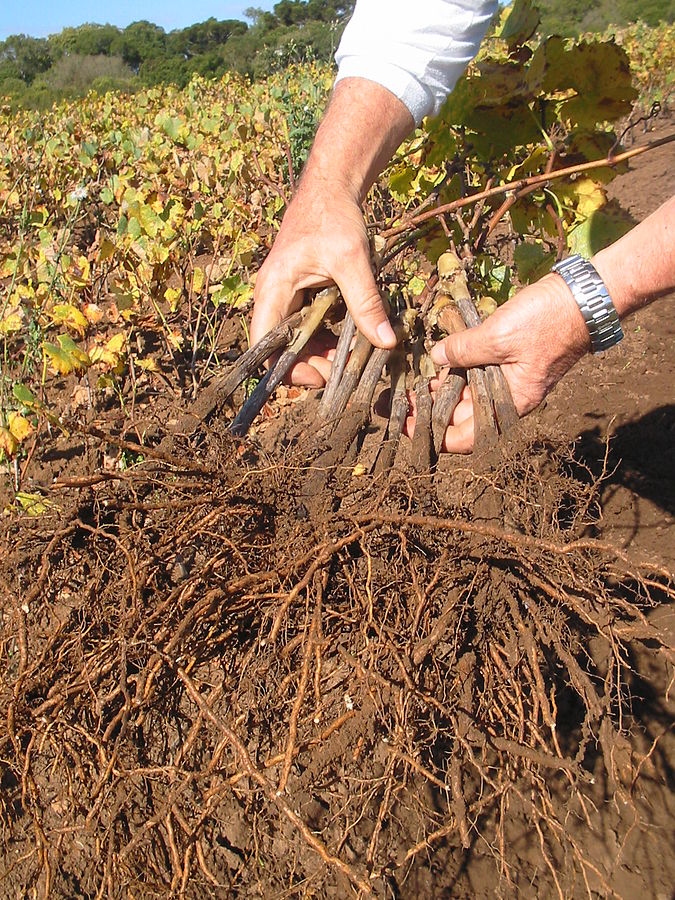 Often you will see a bottle of wine that has the mention of Old Vines or in French Vieilles Vignes.  What does this mean to a wine and what makes it different from other wines ?  Why are old vines so rare ?

To better understand the value of old vines it is necessary to go back over a hundred years in wine history and talk about the crisis that faced winemakers towards the last third of the 19th century.  An unsuspecting French wine merchant named Monsieur Borty inadvertently introduced a little aphid called Phylloxera Vastatrix to the Rhône Valley when he imported vine rootstock from North America. Phylloxera originated on the east coast of the United States and then was spread to California, it is thought that the pest was carried when the pioneers traveled west during the expansion of the country and was subsequently discovered in California in the early 1860’s.

The worldwide spread of Phylloxera was facilitated by the use of steam liners for international transport, as it was now possible to ship live plants across the sea much quicker, on the downside this faster mode of travel also allowed various different kinds of “ hitchhikers ” to catch a free ride and survive the journey.  Unknown to Monsieur Botry, his importation of foreign rootstock almost destroyed the future of Vitis Vinifera, the Eurasian vine species that most European wines are made from.  The little pest hid in the roots of the imported vine rootstock and when the vines were planted in 1862, the aphids proliferated at an alarming rate of speed throughout the soil, attacking the roots of the native vulnerable european vines, which up until now had survived without the presence of phylloxera, they had little or no resistance to the attacking aphids. Phylloxera attacks the roots of the vine either in the young developing roots or the older part of the rootstock which creates a swelling  and eventual spots of dead tissue which lead to the demise of the plant.  Within six years of being infected the grape vines began to die and wine growers started to panic.  To put the severity of the crisis into perspective, one single female phylloxera can produce up to 25 billion descendants over an eight month period so the spread was exceptionally fast.  By 1884 it is estimated that 2.5 million acres of France’s vineyards had already been destroyed and winemakers were becoming desperate as they helplessly watched their livelihoods being destroyed.  Wine growers try to eradicate the pest by burning infected vines and using poison on the aphid but to no avail – the situation looked desolate.

It was French Scientist Jules-Emile Planchon who finally identified phylloxera in 1863 and determined that the aphid had originated from the importation of the American rootstock by Monsieur Botry. At this time wine production represented one sixth of the agricultural production in France so the destruction of the vines had dire effects on the industry.  His findings were confirmed by Charles Valentine Riley.  After the failed attempts of trying to burn and poison the aphids it was two wine growers Leo Laliman and Gaston Bazille who suggested that American rootstock which is resistant to Phylloxera should be grafted to French vines.  The idea was met with opposition from other wine growers but the situation had become so serious that it was finally agreed that the vine  grafting experiment should be tried.  The vine grafting was successful  and the French wine industry was restored.

Unfortunately the damage had already been done and Phylloxera spread throughout Europe and other parts of the world with frightening rapidity – another important contributor to the fast spread of the disease was an Austrian nursery that became infected with phylloxera and unknowingly exported infected vines to different vineyards around the world.   The worldwide presence of Phylloxera now means that most vines throughout the world are now grafted to American Rootstock.

However there are still some vineyards that remain Phylloxera free.  In the Champagne region of France, two small plots of Pinot Noir vines Chaudes Terres and Clos Saint-Jacques are owned by the Champagne House Bollinger and are made into a special cuvée called Vieilles Vignes Françaises.  Like the rest of France most of the Champagne region also infested with Phylloxera and the only explanation that can explain the lack of the pest’s presence is the sandy soil of the the two plots which retards their propagation.  The Italian island of Sicily also has Phylloxera free vines that are growing in the rocky ash filled soils around Mount Etna or some select plots in the Toro region of Spain but these are the exceptions and the rest of the wine growing world is in a continual ongoing combat against phylloxera.  There are two wine growing areas in the world that are still completely Phylloxera free – Chile and South Australia.

So old vines are very important in the winemaking industry as they are a rarity.  In the Barossa Valley in South Australia there are Shiraz vines that date back to 1843 and they are still producing enough grapes to make wine from.

The oldest vines in France are 344 years old and can be found in Reims in Champagne.  The oldest recorded vine in the world is in Maribor Slovenia which has a vine that is 400 years old and is listed in the Guiness Book of World Records.  This vine still produces fruit!

The average lifespan of a grape vine is 125 years.  Once the vine has reached 25-30 years of age it begins to produce less fruit and this continues throughout the lifespan of the vine until it stops producing fruit altogether.  At this point wine growers will put the plant, however there is constant replanting through the vineyard to ensure a continuing supply of enough fruit for wine production.

So back to the original question, what is so special about wine that is made from old vines ?  As vines age they grow a more complex root system and grow new layers of bark each year, similar to the way that a tree develops.  Older vines can add a complexity and richness to the final wine that is produced that is not normally found in wines that are produced from younger vines.  As the vines grow older they produce less fruit, however the fruit that is produced is much more concentrated.  However, like any aging organism, these vines are more susceptible to disease and environmental factors and must be cared for very carefully to ensure that they continue to grow and produce fruit.

So the next time that you drink a glass of Vieille Vignes, remember that it is not just the wine that you are drinking but also an important part of wine history that you are experiencing.  Santé!