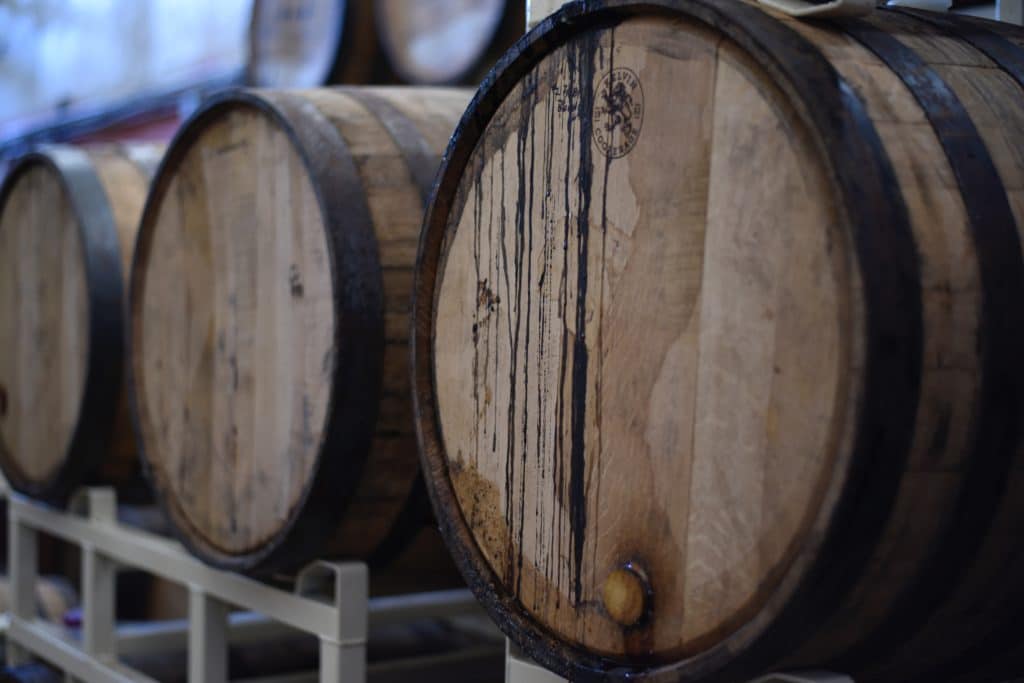 The final sweetness or dryness of a wine depends on how much residual sugar from the grapes is left after fermentation. Here, we’ll explain how this process works and also how to stop fermentation in winemaking. The experts generally recommend that you let fermentation go to its natural endpoint, even in home winemaking. Still, we’ll offer several methods just in case you want to give it a try.

After harvesting, wine grapes are crushed so that their juices can be turned into wine by fermentation. This chemical reaction is accomplished by yeasts in the must, which is the freshly crushed mix of grape juices, skins, seeds, and stems. The yeasts may be wild, airborne yeasts that were naturally associated with the grapes.  Yeasts can also be intentionally added during the winemaking process.

During fermentation, the yeasts consume the grape sugars, converting them to ethanol and releasing carbon dioxide. This ethanol is the alcohol in wine, of course. So, as the alcohol content goes up, the residual sugar content goes down, making the wine more dry. It’s the balance of these processes that controls the final sweetness of the wine.

This also means that the amount of available sugar in the must dictates how much alcohol will be in the wine at the end of the process. Grapes with lower sugar content will generally produce lower alcohol wines. Some wine grape varieties have naturally lower sugar content. Grape sugar content also rises as the grapes ripen on the vine. This is part of why the timing of grape harvests are so critical. Harvesting too early means missing out on valuable sugars.

The Natural Stopping Point for Fermentation

There are two natural stopping points for fermentation. The first is obvious: fermentation will stop when the grape sugars run out and there is nothing left for the yeast to ferment.  At this point, no more alcohol can be produced and the result will be a dry wine, without residual sugars.

The second natural stopping point for fermentation is when the alcohol content gets high enough to kill the yeast. Wild yeasts vary in their abilities to survive these conditions, sometimes dying out while the alcohol levels are less than 10%. This is why many winemakers, even in commercial wineries, add yeasts that they know will survive higher ranges. Although less “natural,” this practice ensures a much more consistent, predictable final product.

The yeast that most winemakers use is Saccharomyces cerevisiae. Part of the reason this particular species has been such a workhorse in the wine industry is that it behaves so predictably. It can tolerate relatively high levels of alcohol, too. Saccharomyces cerevisiae typically survives up until about 15% alcohol. It was identified in the late 19th century and its prevalence in winemaking is part of the reason that most wines fall into the 12-15% ABV range.

In more recent history, yeast strains that can survive greater alcohol concentrations have been identified. Saccharomyces bayanus can survive up to 17-20% alcohol, for example. This makes it a great choices for fortified wines like Port or for higher alcohol wines like Zinfandels and Syrahs.

Other Ways to Stop Fermentation

As we mentioned above, most experts would advise you to just let the fermentation complete on its own and then adjust the sweetness of the wine another way before bottling.  Still, if you want to stop fermentation before the yeast runs out, there are a couple of ways that you can proceed. Some of these we recommend, others we do not.

This may seem like a bit of a curveball if you weren’t planning to make a fortified wine, but the method is tried and true. To fortify your wine, you add distilled spirits to increase the alcohol concentration enough to kill off any remaining yeast. Of course this will significantly change the flavor and also give the final product a big boost in ABV. Fortified wines like Port often hover around 20% ABV.

There are several options for fortifying spirits. For Port, winemakers use aguardente, a neutral grape spirit with between 30-60% alcohol. For Sherry, they use brandy to halt fermentation. To fortify wine that you’re making at home, you’ll need to add the spirit to the fermenting mixture when it’s reached the level of sweetness that you want.

It’s a common misconception that these compounds will kill all the yeast, but this is not true.  In theory, you could add enough sulfites to completely kill them, but it would render the wine undrinkable. The kit dosages take care of most of the yeast, but some always remains. This makes it effective for controlling fermentation in combination with another common compound included in home winemaking kits called potassium sorbate.

Potassium sorbate is a compound that coats yeast cells and prevents them from budding and reproducing. Essentially, it renders any active yeast in the culture sterile. So, doesn’t stop fermentation, but in combination with metabisulfites, you can keep the yeast that survive the sulfites from repopulating your wine. If you add more sugars before bottling, they should be mostly safe from further fermentation.

Note that just because these chemicals are imperfect in stopping fermentation doesn’t mean you shouldn’t add them. If they’re a recommended part of your home winemaking kit, you should use them as they’ll help prevent spoilage. Just adjust your expectations as you proceed with them. 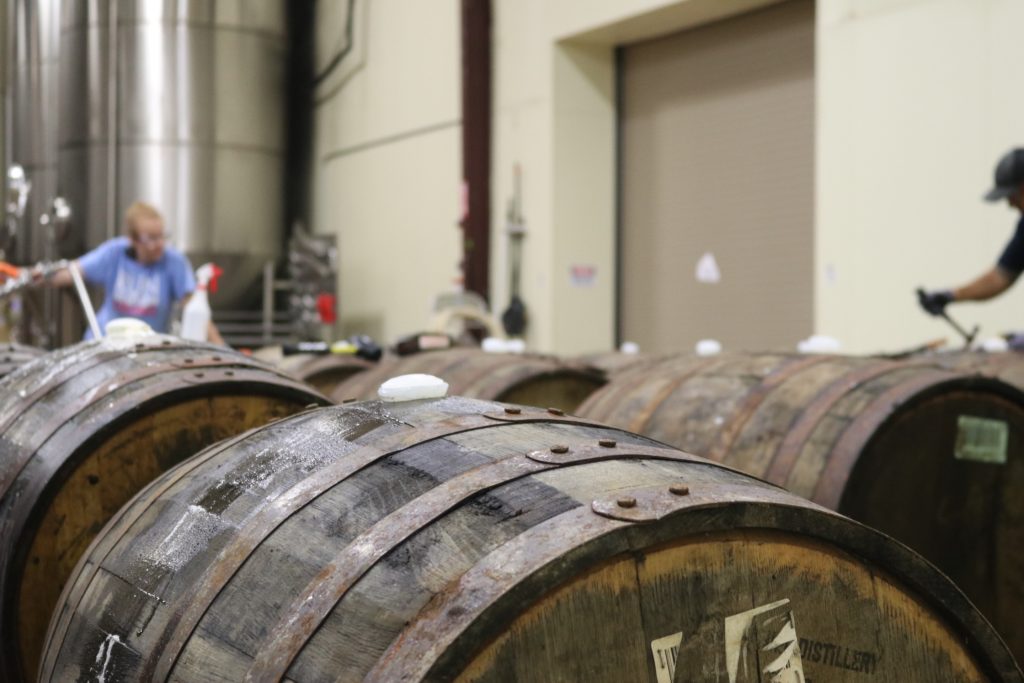 Maintaining the right temperature ranges during fermentation is critically important for preserving the nuances of a wine. Heat speeds up the fermentation reaction, but if the must gets too hot, it could ruin the final product. Compounds that give the subtle aromas and flavors reflective of the terroir would all be lost.

By the same token, cooler temperatures slow the fermentation process. If the conditions in the must get too cold, the fermentation reaction stops altogether. Chilling followed by filtration is generally how a winery would intentionally stop fermentation because it impacts the aromas and flavors of the final product the least.

To accomplish this, the wine needs to chill to at least 50°F, though cooler is better. The fermentation reaction will stop and the yeast will begin to settle. You can add bentonite to speed up this process and clarify the wine. Bentonite is a a gray, clay granule with an electrostatic charge that attracts the yeast cells (and other particles) and causes them to sink to the bottom faster.  It’s a good idea to let this process go for several weeks to make sure it’s fully clear.

After clarifying the wine, it’s safe to rack it and then run it through a wine filtration system to get rid of any remaining yeast cells. These filters have much smaller pores than the ones in cheesecloth or coffee filters. We’re talking laboratory grade filters, at least 0.5 micron or smaller, which can catch individual yeast cells.  The higher capacity filtration systems usually have a few filters in series. They’ll run the wine through filters with larger pores first, then successively smaller ones, to prevent clogging.

Do Not Try Pasteurization at Home

We hesitate to mention pasteurization at all, but we’ve seen it suggested elsewhere around the internet. Pasteurization involves bringing a liquid to high temperatures to kill off any bacteria or yeast that might spoil them. While the the process has been fantastic for keeping commercially-made dairy products safe, traditional pasteurization is really not ideal for wine.  Yes, it would work. No, it’s not a good idea, and we’ll tell you why.

First, heating the wine to the necessary temperatures for pasteurization would certainly alter the flavors. You would run into the same problems as with high fermentation temperatures, but even more of the character of the wine would be lost.

Second, pasteurization would require keeping a steady, high temperature for an extended period of time. While a commercial winery might have the means to control the temperature at that level, it’s unlikely to be possible for a home winemaker. There’s a better chance your wine will get too hot and all your hard work in preparing it up to that point will be lost.

If you’re a home winemaker, our best advice is to just let the fermentation stop on its own. As you can see from the above, these processes are all a bit fiddly and honestly, are probably not worth the trouble.  If your wine is too dry for your taste, you can wait and sweeten it before you bottle it instead. It’s much less work (and much less mess!) to rebalance it at the end.  Plus, you’re less likely to accidentally spoil the final product.

Thinking about making your first batch of wine?  Check out our list of best guides for home winemakers.

Making Wine in Your Instant Pot

The pomace problem … and why it’s a good thing!

The Buzz on Barriques: What are they?