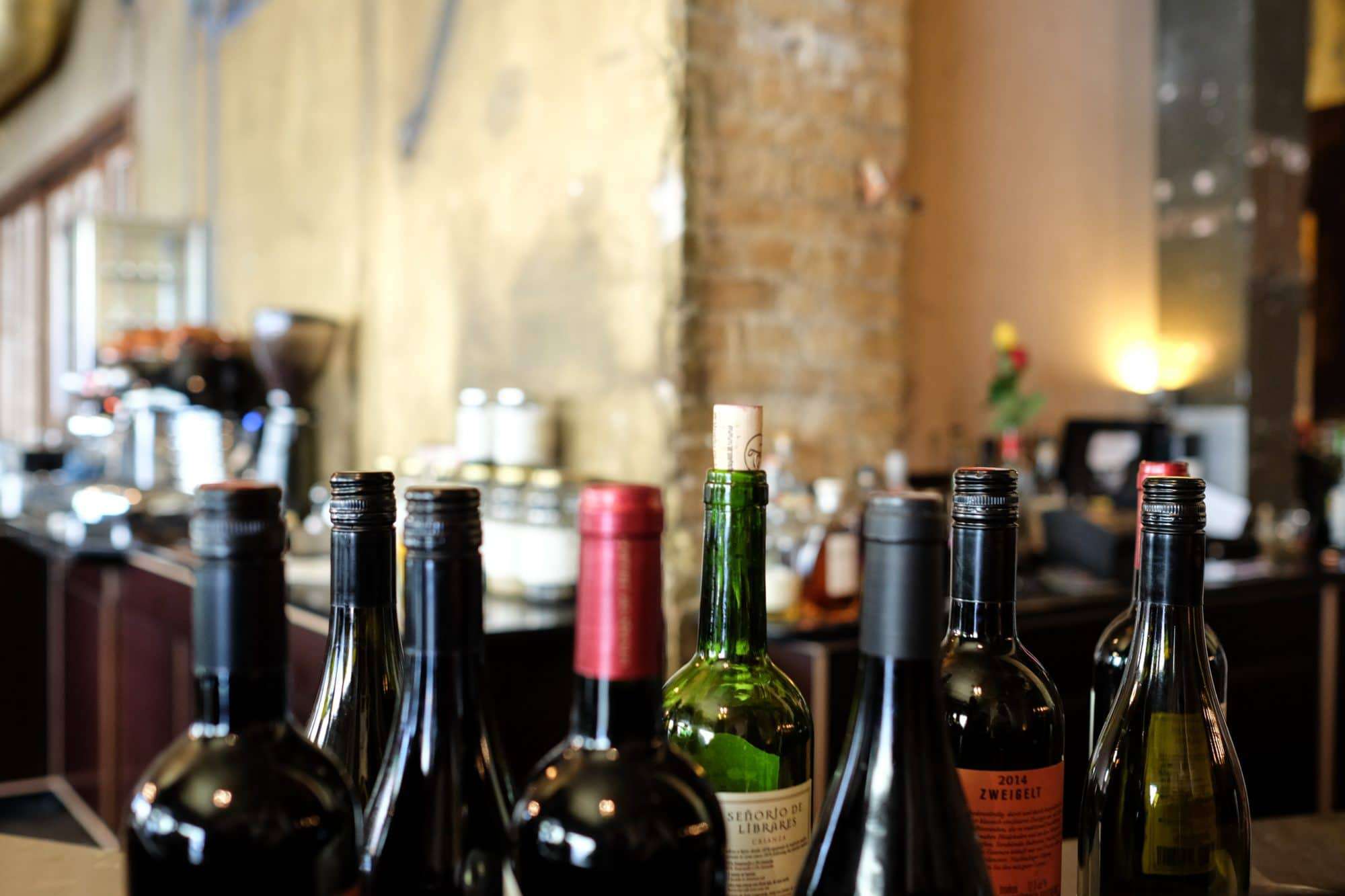 Gamay is the often forgot about little brother (cousin, actually) of Pinot Noir. While it is hard to pinpoint exactly when this grape began to be cultivated for winemaking, viticulturists are thinking it was centuries after Pinot Noir.

Gamay is often deemed as the white wine lover’s favorite red wine. And for good reason. This light-bodied charismatic red wine is a hit with fish dishes, creamy alfredo, or roasted chicken. 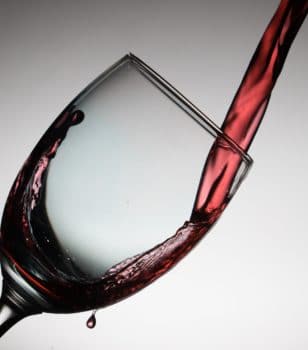 Okay, so 95% of the world’s Gamay is grown in France. Surprisingly, Switzerland comes in second. While it is still a small amount, they still top Canada, Turkey, and the United States with Gamay growth.

You can’t mention Gamay without Beaujolais.

Beaujolais is part of the Burgundy region and is located just north of Lyon. Like most other wines in France, these bottles will not be labeled varietally, but any Beaujolais you get will be Gamay.

Beaujolais is the largest sub-region of Burgundy and has over 40,000 acres of vines. The unique aspects that make this the ideal Gamay growing region is due to a semi-continental climate.

They are close to the Mediterranean Sea and tends to be a bit warmer than the rest of Burgundy, allowing the grapes to almost always fully ripen. As with the rest of the region, the threat of frost is a yearly concern. A vast array of soils such as clay, limestone, granite, and schist are all part of the region’s terroir. 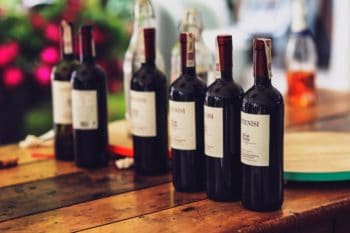 This makes up just over half of all Beaujolais production. These levels are basic quality, although some of them can be quite good. You will often see them in supermarkets around Europe.

Beaujolais Nouveau is a novelty wine that is released every year on the third Thursday in November and has a distinct Tutti-Frutti flavor. This wine “Nouveau” simply means that the wine was released in the year it was harvested and must be labeled so according to French law.

Beaujolais Nouveau is unique, a great way for winemakers to get an initial taste of the vintage, and a great marketing strategy that allows wineries to offset the crazy costs of harvest. This Nouveau is meant to be drunk immediately and will not age well. If you are lucky enough to find one in the United States, make sure that it is less than six months after the harvest date. Anything older than that may not be of much quality.

The village quality levels make up around 25% of all Beaujolais production. These are mid-quality wines that are affordable, available, and often quite good. 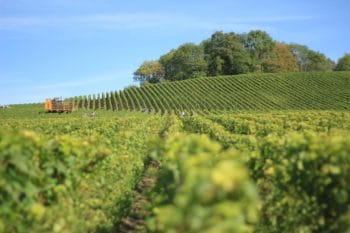 These are the top-quality Gamays of Burgundy. Cru’s are a designated quality zone, so you know you are getting the best of Beaujolais.

There are ten Beaujolais Crus. These Crus are listed from boldest to lightest.

Gamay is not limited to growing in Beaujolais. It is also grown in the Loire Valley of France. It is often used in a blend along with Cabernet Franc. If you are able to find a bottle locally, it is highly recommended. It tastes like an aged Cabernet Franc because the tannins have been softened by adding Gamay.

Here’s a great article for those wanting to know more about how French regions work.

The other places that grow Gamay may seem quite random. However, these are some great spots to grow Gamay as well as Pinot Noir. These light-skinned grapes are temperamental and need ideal growing conditions for them to grow successfully.

A cool climate, rich soil, long growing season, and not too much direct sunlight (the thin skins can burn easily like a sunburn) are just some of these conditions.

While Gamay makes up a very small amount of production in regions throughout Switzerland, Canada, Turkey, and the United States, you will likely see more Gamay wine from them within the next decade or so. This underrated grape is finally getting the attention it deserves! 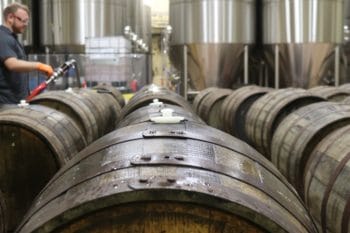 How do I find a good bottle of Gamay?

Great question. It can be hard enough to navigate your way through the aisles of a wine shop, especially when you aren’t familiar with the wine you are looking for.

To really get a good idea of what Gamay should be, start from the top. Grab yourself a bottle of Beaujolais Cru. If you are typically a fan of bolder red wines, start with a Beaujolais Cru that is a bit bolder. These are going to be the first six listed above.

If you are typically a white wine drinker that is looking to come to the dark side, start with trying some of the lighter Beaujolais Crus. These are the last ones listed above.

Lost? Don’t be afraid to ask for help at your local wine shop! 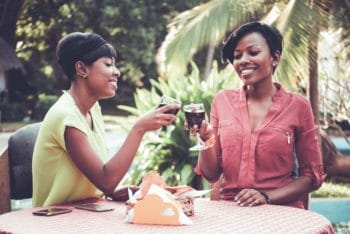 Gamay is known for being a very light-bodied red wine with light tannins, high acidity, and light to medium alcohol levels.

Common flavors and aromas include lots of dark berries like huckleberry, boysenberry, cranberry, and raspberry. Other flavors can include soil, bananas, and flowers.

Beaujolais Nouveau is known for their distinct Tutti-Frutti flavors. 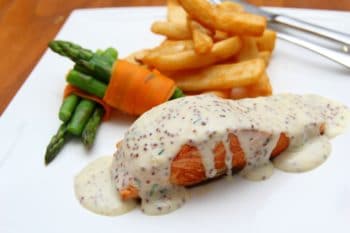 One of the best things about Gamay is the range of foods that can be paired with it. Practically anything will go well with a light-bodied and acidic red wine. Like rose, Gamay is a great wine for appetizers because it is so easy to pair.

Because Gamay is light-bodied and acidic, it is best paired with foods that have fatty content. The acidity in the wine will help cut through the richness of the fat. Avoid pairing with foods that are spicy.

Below are some ideal foods to pair with Gamay.

Smoking tuna gives this fish just enough oomph to stand up to red wine, no matter how light. Add the smoked tuna to an appetizer plate and put it on crackers.

Don’t even think about using tuna from a can. Nothing beats fresh tuna, and it’s surprisingly easy to cook.  Whether it is seared, raw, smoked, grilled, or made into a burger, you can’t go wrong with tuna.

Gamay pairs well with essentially any tuna dish and it is so healthy for you.

Here is a step-by-step guide on how to make your own smoked tuna.

Gamay is a great match for all of the wonderful flavors of freshly made shredded chicken tacos.

*Be careful about adding too much spice. Gamay is quite acidic and can amplify any heat.

Here’s a great shredded chicken recipe for all of the die-hard Crockpot fans out there.

Let’s get down to the basics with fried pork chops and mashed potatoes. Gamay is a great way to make a simple and cheap home-cooked meal into a fancy weekend supper.

The dark berry flavors of Gamay will complement the mashed potatoes really well.

Anyone else obsessed with the Pioneer Woman? Here is one of her older tried-and-true recipes for fried pork chops.

It is guaranteed that trying this recipe for chicken pesto pasta and roasted tomatoes will change your life and be your new go-to weekday dinner.

It is also great with shells or spaghetti noodles or whatever pasta you have on hand. You can even put your own spin on it.

Gamay is a great pasta dish and goes well with pesto, alfredo sauce, or just plain olive oil. The richer the better, as the acidity and unique flavor combos of Gamay can stand up to the creamiest of sauces. 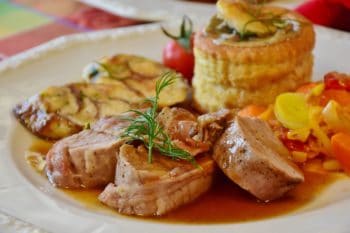