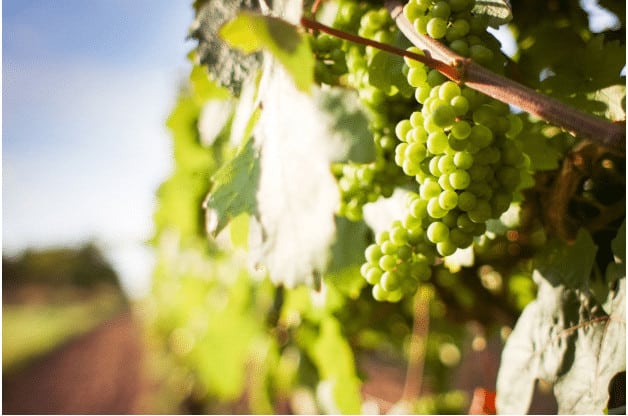 Did your grandmother drink sherry? Mine was more fond of a nice dry red, so I don’t have the same associations that lots of people do. They think sherry is for old people, an outdated drink of a bygone era that the young and hip shouldn’t bother with. But nothing could be further from the truth. In fact, sherry wines are some of the most interesting wines out there, and the first ones I often recommend to that whiskey aficionado looking to fall in love with wine. So, what is sherry?

Sherry is a fortified white wine hailing from Andalucía in the area surrounding Jerez de la Frontera, one of the oldest wine regions in Spain. Jerez was originally called Sherish, and the English word “sherry” comes from both. The name is protected under Spain’s Denomination of Origin (DO) system such that only wines from the Sherry Triangle may be labeled Sherry. The cities of Jerez de la Frontera, El Puerto de Santa María, and Sanlúcar de Barrameda make up the points of this triangle.

Until 1894, there were hundreds of grape varieties involved in Sherry production. That year, there was a infestation of Phylloxera, an aphid-like pest that feeds on grapes. It devastated the vineyards in the area, though some of the larger producers were able to survive by later planting hybrid, resistant vines.

Growth conditions are also essential. At least 40% of the grapes going into a sherry must be grown in albariza soil, which is a very light-colored soil. It contains almost 40% chalk, which reflects sunlight back up at the vine, as well as clay and sand. This type of soil is also compact and absorbent, helping it to retain moisture during dry weather.

The other two types of soil in the area are barros and arenas, each of which contains approximately 10% chalk. Barros is brown due to its high levels of clay, and arenas is yellowish, due to higher levels of sand. These are more ideal for Pedro Ximénez and Moscatel grapes.

How Sherry is Made

Sherry is matured through a complex system known as solera, which means “on the ground” in Spanish. Traditionally, oak barrels filled with aging sherry were stacked by age with the oldest barrels on the bottom. (Today, they are just as often arranged in blocks by age for easy access.) Sherry is bottled from the oldest tier, though only a portion of the barrel is tapped. The tapped volume is then replaced with sherry from the barrels in the next oldest tier, and left to age for the next interval. This means the final product is always a blend of younger and older sherries, including traces of the original wine placed in the solera. 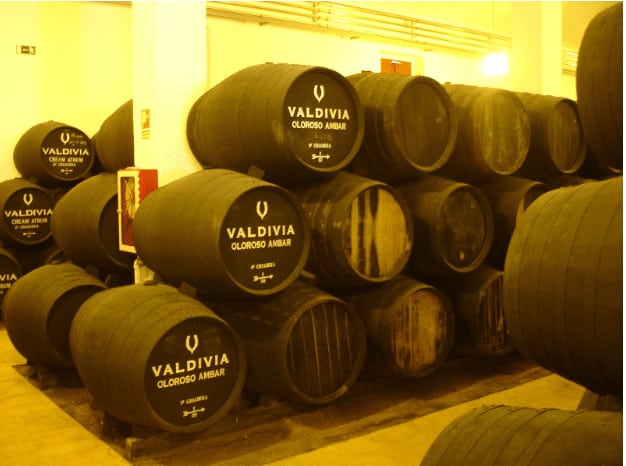 [Some Sherry soleras are still physically stacked, while others are simply arranged in blocks by age. Photo by El Pantera at Wikipedia.]

Another thing that makes Sherry wine unique is the use of flor during aging for some of the styles. Winemakers fill the casks about ⅚ full, leaving room for formation of this protective yeast layer which protects the wine from oxygen. Flor is made up of ambient yeasts, meaning the composition will be unique where to the where the sherry is made. If and when the flor disappears, the oxidation chemistry is different, too, hence the many different flavor profiles among the styles of sherry. 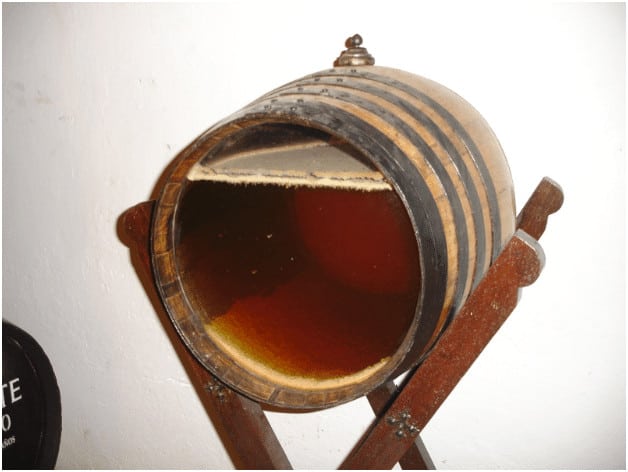 [Sherry with transparent panel for visualizing flor. Photo by El Pantera at Wikipedia.]

Finos are the driest, palest of all the styles of Sherry. They’re aged under flor and matured for at least two years, though the best are tapped after four. They have strong mineral notes, saltiness on the nose, and hints of oakiness. Finos are beautiful with almonds, olives, cured meats, and oysters. They’re a wonderful choice of wine if you’re out for tapas on a summer afternoon.

Manzanillas are quite similar to Finos, except that they’re produced specifically in the seaside city of Sanlúcar de Barrameda. The strong flor growth facilitated by this environment yields a crisper, lighter-bodied wine that has a saltiness due to the winds off the ocean. Manzanilla pairs beautifully with almonds, olives, anchovy, and white fish dishes.

Like Fino and Manzanilla, Amontillado begins its aging under flor, but then the flor is allowed to die off. Oxygen begins mingling with the wine, shifting its character as it continues to mature. Ultimately, this yields a darker, richer wine with more nutty, savory elements. It may have notes of almonds, dates, tobacco, herbs, and polished oak. Amontillado pairs well with many different foods, including roast chicken, prawns, blue fish, and strong cheeses.

Olorosos age without flor, in part because they have higher alcohol content when they enter the solera. They’re left to age much longer than Finos, sometimes up to 25 years. This creates darker, thicker wines that have the highest alcohol content among the styles, usually between 18-20%. Olorosos are very fragrant, too, boasting aromas of caramel, hazelnut, tobacco, leather, and wood. While they’re still dry overall, they’re sweeter than the above styles, and go beautifully with game, red meats, bitter chocolates, and blue cheeses. Sweetened “cream” blends of these sherries pair wonderfully with sweet pastries.

Palo Cortados are made when Sherry is aged under flor for just a few years before it begins to die. Once the flor is gone, the wine is fortified to a higher alcohol level (17.5%) to make sure it doesn’t spoil. The result has the body of an Oloroso, but dark, nutty aromatic qualities more like an Amontillado. Pair a Palo Cortado with olives, cheeses, or foie gras. 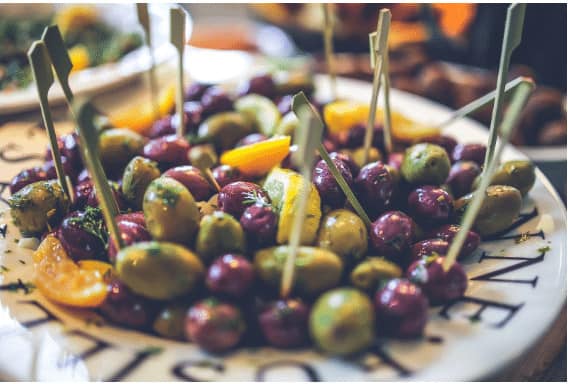 [Most dry styles of Sherry pair wonderfully with olives.]

Sherries made from Pedro Ximénez and Moscatel grapes are sweet and the production process intensifies this at each phase. The grapes are sun-dried after harvest, turning them into raisins which concentrates the sugars. They’re then fermented to produce very sweet, thick wines that are nearly like syrup. Like the above, they are still blended, in some cases with drier sherries. Aromas tend to be nutty, spicy, and dark, sometimes with hints of dried fruit. The over-the-top sweetness is a big turn-off for a lot of wine drinkers, but in the right context, sweet sherries are magical. They’re wonderful to sip while having a pastry or a funky blue cheese. Some also love drizzling sweet sherry over vanilla ice cream.

You should store bottles of Sherry upright to minimize the surface area for oxidation. The high alcohol content tends to break down the cork, too, which is not ideal for obvious reasons.

For serving, you’ve probably seen the old style traditional sherry glasses, but any tulip-shaped white wine glass will do. We love these simple, beautiful Sherry wine glasses from Riedel. 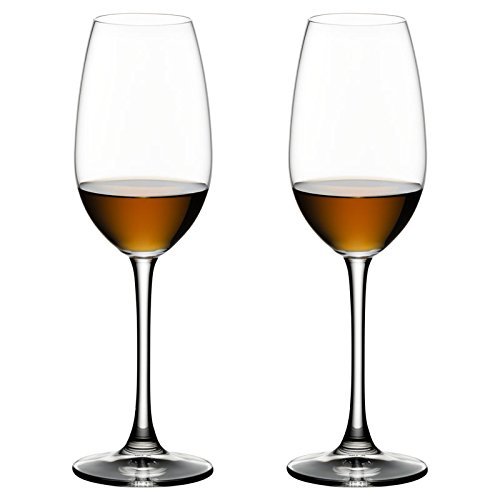 Keep in mind that Sherry is more potent than most wines, ranging from 15% to over 20% ABV, hence the smaller serving glasses. If you choose a larger wine glass, be sure to serve responsibly.

You should also serve sherry chilled. There are slight variations in optimal temperature depending on the style, but there’s no need to pull out a thermometer and get too fussy about it: